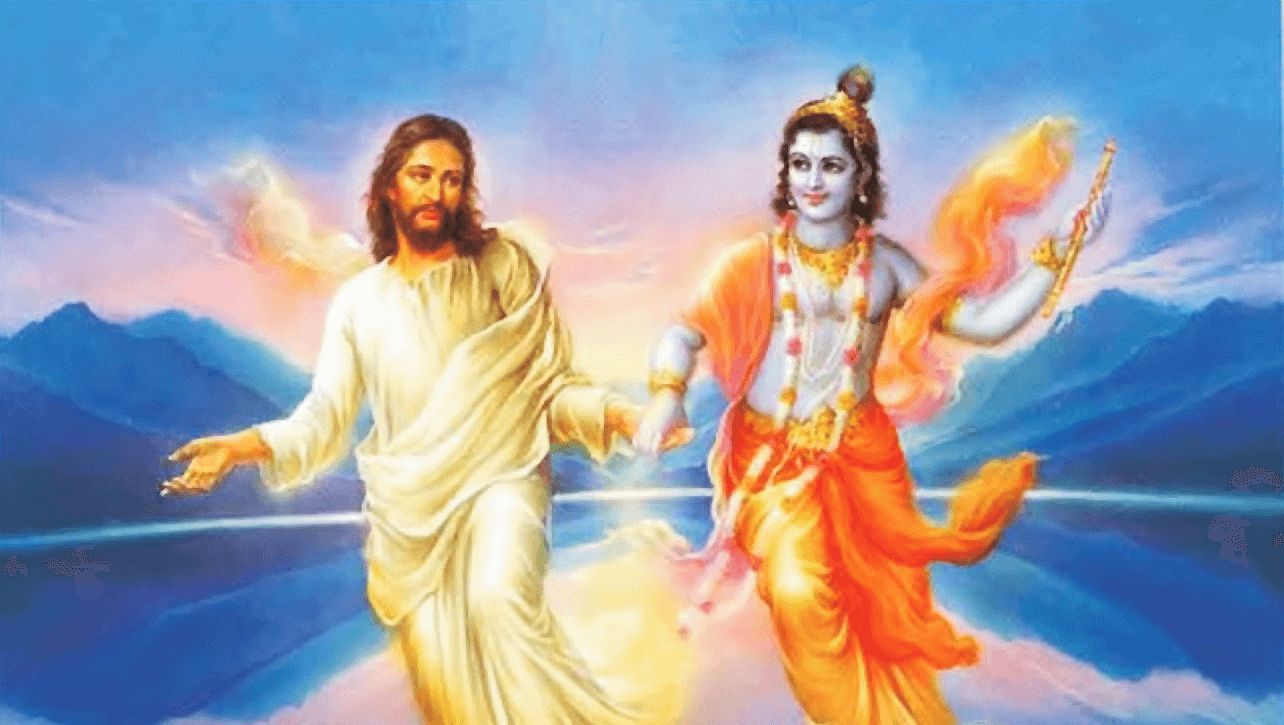 To Christians, Christ is the Incarnation of God. To Hindus, Krishna is the most revered Indian divinity and is worshipped as the 8th reincarnation or the avatar of Vishnu, the Hindu God. But do Hindus regard Christ as Krishna? Is Jesus Krishna?

Jesus is not Krishna. In Hinduism, Jesus is portrayed as a holy man, a wise teacher, and a ‘god.’ They believe that Jesus Christ represents a wise and enlightened man or teacher. Therefore, they place Jesus on the same high pedestal as their gods and teachers. This comes from the fact that mysticism and wisdom are central to the Hindu religion.

What, then, do Hindus think about Jesus Christ? Is Jesus the same as Krishna? How do Hindus view Jesus? How do Christians view Krishna? Was Christ a reincarnation of Krishna? Who came first between Krishna and Jesus? Why is Jesus more popular than Krishna? Keep reading to learn more.

Is Jesus the same as Krishna?

While many people acknowledge the possibility that Krishna and Jesus Christ are the same thanks to their many similarities, there isn’t any religious, scholarly, or theologian evidence supporting this.

It’s worth noting, however, that while Krishna represents a Hindu deity revered as the Supreme god for Hindus, Jesus wasn’t alive at the same time as Krishna, and neither was Jesus born in India. Jesus was born in Palestine as a Jewish man from the 1st Century AD. Unlike Krishna, who is regarded as Hinduism’s supreme God, Jesus Christ is known as the son of God, born of the Virgin Mary to become the Savior of all mankind.

That said, Krishna and Jesus Christ have a lot in common, including that they both performed many miracles, taught and enlightened believers about various spiritual truths, and, most importantly, were both fully human and divine. Also, their deaths meant saving mankind – while Jesus Christ was crucified on the cCrosstorturously, Krishna met his death Achilles-style through an arrow that struck his heel in a battle with demons. It is also believed that they both rose from the dead, albeit after predicting their deaths.

However, no evidence points to the two divine beings being the same person. Notably, Krishna is regarded as an incarnation or the avatar of the Hindu god, Vishnu. In Hindu scripture, Krishna has been deemed the source of all life and creations, the destroyer of evil, and a god who protects righteousness. Jesus Christ, on the other hand, is the son of God, as Christians believe.

How do Hindus view Jesus?

Hindus and many people in India consider Jesus one of the gurus – God or teacher – necessary in their religion because of the similarities between Jesus’ life, mysticism, and wisdom and those in Hinduism. And so, it doesn’t come as a surprise to note that most Hindus see Jesus and Krishna as one person.

One of the main reasons for this belief comes from the names Christ and Krishna. Krishna is often pronounced as Krsta, the Sanskrit word for attraction. Therefore, Hindus address their God as Krishna, Krsta, or Chris – these are all names used to describe the all-attractive personality of the Supreme God (Godhead). It is also worth noting that Christ is derived from the Greek word, Christos, meaning anointed one – and in Greek, Krishna means Christos. According to scholars, a close relationship exists between Heracles (clan of Hari), as referenced by Megasthenes in Hari-kula-es, hence the association with the Krishna clan.

Additionally, they hold this belief because to the Hindus, Jesus Christ, like Lord Krishna, is ideally another one of the Divine’s avatars. In this regard, Hindus view Jesus and Krishna as Divine beings sent to earth to guide humankind on a righteous path. They also believe that Jesus is Krishna or one of their gods because they are both complete human forms and fully divine beings.

The Hindu belief that Jesus Christ is a guru and one of their gods seems to come from the absence of a church of Hinduism. Hindus hold unique philosophical and spiritual opinions, also called Sadhana in Sanskrit. Sadhana is all about what someone practices and what they believe in. These practices and individual spirituality are rooted in personal convictions regarding humility, tolerance to others, control of senses and minds, non-violence, compassion, and kindness.

With Christ having these values and meeting the criteria governed by the Hindu Sadhana, Jesus measures up and is regarded as a holy man or a Sadhu. Jesus also gets this title from Hindus because his preaching was about the universal love for God and one’s brothers, a kind of love beyond selfishness or sectarianism. And because Jesus Christ appealed to mankind from the heart and touched hearts, he is considered a Hindu Saint.

Finally, Hindus regard Jesus Christ as a form of avatar for empowered incarnation, better known as a Shaktavesha avatar.

How do Christians view Krishna?

While most Hindus believe Christ and Krishna are names of the Divine, cut from the same cloth, Christians disagree with these sentiments and regard them as baseless. This is primarily because Christ means Messiah or the anointed one, as all Christians believe, while Krishna is technically just another personal name.

That said, numerous Christian apologists reject Krishna and consider him an impostor. They deem Krishna and the belief that he may be Jesus Christ a perversion of the ideals of Christ, the Savior.

How is Jesus different from Krishna?

There are many differences between Jesus Christ and Krishna, but these are the common differences.

Unlike Jesus Christ, who is believed to have been born of the virgin Mary, Krishna’s mother wasn’t a virgin because she (Devaki) had conceived and given birth to 7 other children (sons). Out of the first 7 sons, the first 6 had been executed by Kamsa, the evil prince. Jesus Christ, on the other hand, was born of the Virgin Mary, a fulfillment of the prophecy by the prophet Isaiah, as implied in Isaiah 7:14 and Matthew 1:23.

While Jesus and Krishna are said to have been born in a manger, this isn’t true. Jesus Christ wasn’t technically born in a manger, but he was placed in the manger after his birth, as suggested in Luke 2:7. On the other hand, Krishna was born in a prison cell, as indicated in Hindu texts. It is believed that Krishna’s birth in prison happened after Kamsa imprisoned his Sister, Devaki, alongside Vasudeva, her husband. Kamsa imprisoned them after receiving news that the 8th child of the couple, Krishna, would kill him.

Age when they died

While Jesus Christ is recorded to have died on the CCrossat 30 or in his early thirties, Krishna didn’t die at 30 as some have assumed. It is believed that Krishna lived a longer life, with Hindu scholars reporting that Krishna died at 125 years.

The deaths of Jesus and Krishna further differ in terms of their details. Jesus Christ died a gruesome death when he was crucified on the cross, but Krishna’s death wasn’t a result of crucifixion. Instead, Krishna’s death mimics that of Achilles because he was killed by an arrow when a hunter called Jara shot him in the foot with a poisoned arrow mistakenly, thinking he was a deer. The whole story of Krishna dying on the cross made up.

While both Jesus and Krishna resurrected after death, Jesus’ resurrection was after 3 days from the rock tomb he’d been buried in, as suggested in 1 Corinthians 15:20 and 42-44.

On the other hand, it is believed that Krishna resurrected almost immediately after his death because it’s noted that Krishna’s spirit appeared moments after his death, thanks to the Hindu belief that his spirit was liberated or freed from his body. With this in mind, Hindus today have pilgrimages to Dehotsarga, where they believe Krishna died.

What is the relation between Krishna and Jesus?

Many believe there exists a relationship between Jesus and Krishna because they shared similar teachings, even when their teachings were based on the Holy Bible and Bhagavad Gita, respectively. Both scriptures emphasize the importance of righteousness for all humankind – in the Gita; Lord Krishna suggests that he reincarnated himself to protect righteousness and to punish sinners. Jesus also implies that he was sent to earth to save mankind as the son of God, as he came (was reincarnated in human form) from God – John 8:42. Aside from this, they had similar teachings emphasizing peace, love, self-control, and compassion.

Was Christ a reincarnation of Krishna?

It’s also worth noting that Jesus Christ was referred to as Jesus of Nazareth, and Krishna is a deity worshipped by Hindus in India and other parts of the world. Additionally, the idea of reincarnation is essentially and centrally a Hindu rather than a Christian belief.

Who came first between Jesus and Krishna?

Krishna, the God of love and compassion, is an important Hindu deity that lived more than 3000 years ago, while Jesus was born in the 1st Century AD and is believed to have lived among men about 2000 years ago, meaning that Krishna came first.

Note that Krishna is a revered Hindu deity reincarnated to bring mankind spiritual enlightenment. He is regarded as the 8th avatar of the Hindu god, Vishnu. On the contrary, Jesus of Nazareth was born in Palestine and is an important figure to Christians because he is the Son of God.

Is Krishna the father of Jesus?

No, Krishna isn’t the father of Jesus Christ. These two divine beings are separate religious figures. Matthew 16:15-16 implies that Jesus is the son of God while Krishna is the 8th avatar of the Hindu God, Vishnu, born to Devaki and Vasudeva, Prince Kamsa’s kin.

Why is Jesus more popular than Krishna?

While there is no specific way to determine why one figure is more popular qualitatively, the different cultural and historical setups for Christian and Hindu religions have primarily contributed to the differences in popularity. Jesus remains the central figure in all of Christianity, boasting over 2 billion followers who believe that Jesus is the Savior of humanity and the son of God. On the contrary, Krishna is revered by Hindus across Nepal and India.

That said, one should remember that whether one religion is more popular than the other is subjective since people are drawn to different religious or spiritual beliefs and teachings.

Differences between Krishna and Jesus