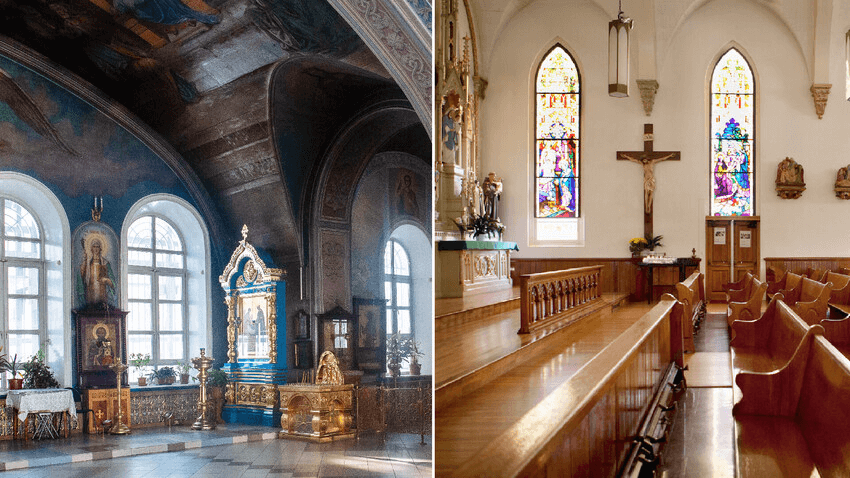 One of the most significant theological differences between the Roman Catholic and Eastern Orthodox churches is that while the Catholic Church holds the belief that the Holy Spirit proceeds first from God the Father and then to Jesus Christ, His Son, the Eastern Orthodox believe in the Holy Spirit proceeding God the Father, alone and not Jesus Christ.

There are several other differences between these two denominations, such as the different ecumenical councils, spirituality, and view of sacraments. Keep reading to learn more.

What is the difference between Eastern Orthodoxy and Roman Catholicism?

The Eastern Orthodox Church, or the Orthodox Catholic Church, is one of the main branches of Christianity. Still, despite having similar roots and many similarities in church traditions and even the liturgies, they are spread out very different geographically.

Eastern Orthodoxy is mainly found in Russia, Greece, Ukraine, the Balkans, the Middle East, Australia, and North America. On the other, Roman Catholicism started in Vatican City but is predominant in Brazil, Mexico, The United States, Poland, The Philippines, Colombia, Italy, and the Democratic Republic of the Congo.

Roman Catholic Church gets its name Roman from the City of Rome, and Catholic means universal, representing a worldwide collective of churches that follow Catholic traditions.

On the other hand, the Eastern Orthodox is broken into Eastern to represent the geographical location that the church is based, in this case, where the church capital is based – Constantinople. In this case, the West does refer to a West Orthodox but Roman Catholicism. Orthodox is a Greek word that means the Right/ Correct belief. So, Eastern Orthodox has deemed the correct system of belief for people in Europe and all areas that were previously under the governorship of Constantinople.

Years they were formed.

While Catholicism believes that the Catholic Church has existed since Christ founded it, it became a mainstream religion in 380AD, after Pauline Christianity was validated in 313AD. It became the Roman Empire’s main religion in 380AD, and for the next 1000+ years, Catholics were the only recognized Christians.

It’s also worth noting that the membership of the Orthodox Church is now made of more than the Greek, with more Slavic people joining the belief as the church is now quite popular in the Polish, Ukrainian, and Russian cultures.

Roman Catholicism and Eastern Orthodoxy also differ regarding heads of the church, specifically, the whole idea of the Pope’s importance, built on the Catholic Church. Notably, Eastern Orthodox churches consider Jesus to be the only head of the church, but for Catholics, Jesus headed the church, but primacy now sits with the Pope, who goes by the title of the Vicar of Christ. This position was created after the Apostle Peter was given complete and absolute authority over the church of Jesus Christ. So, upon Peter’s visit to Rome, he was appointed the bishop of Rome and the Pope to lead the entire Catholic Church. After serving as bishop for some years, he later transferred power to his disciples and successors, who became the Bishops of Rome.

On the contrary, the Eastern Orthodox Church regards all its bishops and the archbishops as mere mortals ordained and vocated to guide the church and to lead in different religious services.

Interestingly, the church split was because of one disputed clause that was not written in the exact wording as what had been articulated in The 2nd Nicaea Council in 325 or the 381 Council of Constantinople I. The problematic clause had been added in Toledo in 589 before its endorsement in 1017.

Note that the ecumenical council is also called the general council. It represents a meeting of bishops for the entire church, with local councils created to represent provinces or synods. And for the council to be recognized by the church, it must be called by the Pope.

While the Roman Catholic Church requires its bishops and priests to remain celibate before and after the ordination, with deacons only swearing to remain celibate after their ordination, the Eastern Orthodox Church requires its priests and deacons only to observe celibacy after their ordination. As a result, many of the Orthodox priests and deacons are married. However, the Eastern Orthodox Church has rules for married priests or deacons. The requirement is that if their spouses pass away before them, the church disallows them from remarrying. The Orthodox Bishops must be monks, and all Bishops must observe celibacy before and after ordination.

On the other hand, Eastern Orthodoxy requires that all their believers perform the sign of the cross with three rather than 5 fingers – the thumb, middle, and index fingers. These three fingers are put together in the Orthodox Church to represent the Holy Trinity. It’s also worth noting that for the Orthodox Church, the remaining two fingers must press against the palm to represent the duality of Jesus Christ – that is, Jesus Christ is both human and divine. The other notable difference is that the Orthodox Church’s sign of the cross goes from the right to the left shoulder after the head and the chest.

A more visible difference between the Orthodox and the Roman Catholic churches is the bearded priests. According to the Eastern Orthodox Church traditions, the priests are required to wear and keep beards. They are warned against shaving their beards, not even the edges of the beards. They are also warned against cutting up their bodies, as implied in Leviticus 21:5. They believe that this is what the priests are expected to look because Jesus Christ didn’t shave as he was pictured with long hair and a beard. And besides Jesus, the Biblical prophets and kings also wore their beards long.

Contrary to the Orthodox, Catholic priests cannot have beards and are expected to be always clean-shaven. Roman Catholics argue that this is required of their Priests because of the clean-shaven culture associated with the papal seat in Rome.

Did you know that in the Eastern Orthodox Church, every believer, including infants, receives the Holy Communion from the time they are baptized? This is one of the critical practices of the Orthodox Church that stems from the biblical suggestions in Mathew 19:14, where Jesus directed that all children be presented to him. So, from infancy to age 7, the kids receive Communion without needing confession. The orthodox believe that children aren’t responsible for their actions or thoughts until a certain age, so they should receive Holy Communion. But after the 7-8 age group, the Children only receive Communion after Confession.

But the rules are different for the Roman Catholics, where children get their first Communion at 8 or 9 years, an age at which the Catholics deem reasonable because children understand the role and significance of the Holy Communion at this age. Earlier than this, they don’t understand the difference between the Eucharistic bread and the normal bread, which also means that they are unable to confess at an early age.

The other notable difference between the Roman Catholics and the Orthodox is that while Catholics use Azymes or unleavened bread to refer to the Eucharistic bread during Communion following commands suggested in Exodus 12: 15-20, the Eastern Orthodox Church uses leavened bread (with yeast) for the Eucharistic bread, and this happens during the Eucharist or the Divine Liturgy from Leviticus 7:16. Note that Greeks call bread Phosphoron, which translates to the offering.

According to the Roman Catholics, God imparts Grace to His people through the Sacraments, with the Catholic Theologies adding that salvation includes forgiveness and regeneration, followed by Sanctification. Note that Sanctification is all about progressive growth in the way of Christ and holiness.

On the other hand, the Eastern Orthodox church views salvation as a form of deitification 2 Peter 1:4, which is the process of becoming more than God. However, deitification doesn’t mean that Orthodox believers will be exactly like God.

While both churches are led by the Catholic Bible Apocrypha or deuteron-canonical literature incorporated into the Old Testament, including Judith, Tobit, and Wisdom of Solomon, the Eastern Orthodox Church also has deuterocanonical books in the Old Testament, such as 1 Esdras Psalm 151, found in Septuagint.

The Catholic Church calls the leading church service, Mass, centered on the Eucharist and teaches about the source or summit of Christian Life, while the Eastern Orthodox call the service the Divine Liturgy.

What are the similarities between Eastern orthodoxy and Roman Catholicism?

This unification clause between the Catholics and the Orthodox dictates the shared belief in Jesus Christ or From the Son (as Filioque is translated). This shared belief agrees that Jesus Christ sent down the Holy Spirit during Pentecost in his ministry following His ascension.

In Roman Catholicism and Eastern Orthodoxy, it is believed that Jesus of Nazareth reincarnated into the Son, Second Trinity. Both beliefs also agree that Jesus Christ was born by a Virgin, and he led a sinless life. The story of the history of Christ, his resurrection, and his death are similar for both churches.

The Catholic Church and the Orthodox Church teach that God is Triune or the Trinity, as God the Father, the Son, and the Holy Spirit, meaning that God exists as a divine and as a person.

Takes on the Bible

Regarding rites, both Catholic and Eastern Orthodox churches use incense and specific symbols in Mass and liturgy. The incense smoke is crucial as it symbolizes Sanctification, purification, or deitification in the Orthodox church. It is also a symbol of the prayers made by the faithful in the church while also standing for an outward representation of the spiritual realities.

Why did Eastern Orthodox and Roman Catholic split?

The split, also known as the Great Schism, resulted from a mix of complex religious and political disagreements. One of these disagreements was about changes in the Nicaea Creed’s wording, but they were driven mainly by the disagreements between the Western and Eastern (Byzantine) church branches. The churches couldn’t agree on the nature of the Eucharistic bread in the Holy Communion, whether to use leavened or unleavened bread for Communion, which led to the break.

What do Catholics think of Eastern Orthodox?

While the Eastern Orthodox and Catholic churches have a lot in common, Catholics respect the Orthodox and think of them as another religion. And because the Eastern Orthodox recognize Papal Supremacy, they don’t think of the Catholic Church as being heretical but schismatic. It’s worth noting that despite the separation, there is less tension and reduced hostilities between the churches, and the believers get along pretty much.

Catholics can attend an Eastern Orthodox Church service. Still, Catholics aren’t permitted to receive the Eucharist as per the Eastern Catholic Law or Canon 671, which suggests that these two churches aren’t in full Communion, at least not yet.