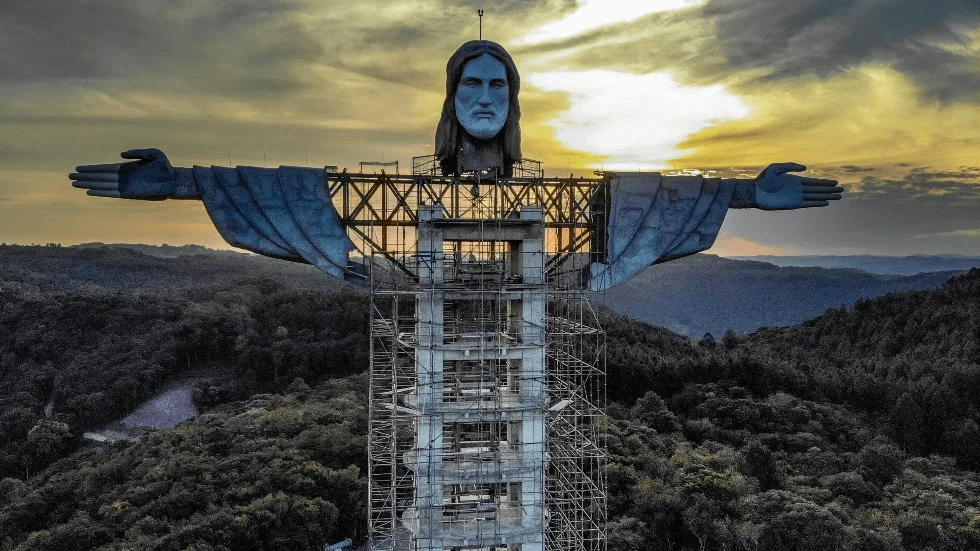 The Christ the Redeemer statue is one of the most awe-inspiring statues ever built. Especially because of its size, posture, and geographical location on a mountain summit. The statue has even acquired the title of UNESCO world heritage site. From its epic proportions to the geographical location that it occupies, it’s impossible not to wonder how was the Christ the Redeemer statue built?

According to historical records, the Christ the Redeemer statue was built on site by construction workers who transported the materials from the foot of the mountain by cog train. The construction workers only build the main body and arms of the statue from reinforced concrete. However, the head and hands of the statue were not built in Brazil, as many would think. They were both designed by a French artist and were made in clay and were later shipped to Brazil, where they were cast into concrete and added to the statue’s body.

So, how was the Christ the Redeemer statue built? How long did it take to construct? Who was involved in its construction? What materials is it made from? This article answers these and more questions; read on to discover more about this world heritage site. Read on!

Who designed the Christ the Redeemer statue?

The Christ the Redeemer statue is a wonder for many people who visit Rio de Janeiro. It’s always among the top sites that they visit in the city. Many people wonder who was responsible for the construction of such proportions. Before we get into that, it is important that we understand why the statue was built in the first place. Toward the end of World War I, the Roman Catholic Church in Rio de Janeiro was concerned with the raising of godlessness among the citizens of the city to combat this, they decided to build a statue that would serve as a reminder to the people of God’s presence.

As a result, the Catholic Church of Rio De Janeiro decided to commission a Brazilian engineer by the name of Costa Heitor da Silva to construct a statue of Christ. It was decided to build the statue on the highest point, which was at the summit of Mount Corcovado. The initial design was to have Christ holding a cross in one hand and a globe in the other hand while facing the sunrise, but this design idea was rejected by the public. This made the engineer rethink his idea and later settle on the design that is known today of Christ, having his arms wide open with empty hands.

The engineer Costa commissioned a French sculptor, Landowski Paul, to carve the head and hands of the statue. Since the sculptor was based in France, he carved the pieces separately in clay, and these pieces were shipped to Rio De Janeiro separately, where they were cast in reinforced concrete and attached to the main statue body. Mr. Landowski was the one to come up with the statue’s design which is referred to as Art Deco, which is simple to execute yet stunningly beautiful.

How is the design of the Christ the Redeemer statue?

The design of the Christ the Redeemer statue was not always the design that we have grown to know and loved all these years. In its beginning stages, the engineer in charge of the construction had the idea to build the statue with open arms, but the statue’s hands were not empty as we know them today. Mr. Costa’s design incorporated a globe in one of the statue’s hands and a cross in the other. Since this statue was commissioned by the Catholic church of Rio de Janeiro at the time, they involved the people of the city, and this ended up being rejected. The people saw it as Christ holding a ball since the globe’s features could not have been visible from afar. This made Mr. Costa remove the cross and globe from the original design leaving it with empty hands as it is today.

In 1923 the engineer in charge commissioned a French sculptor to come up with the final design of the statue. The artist named Oswald Carlos chose the art deco design, which is a simple yet stunning design for the statue. This featured a long robe that was folded, a typical attire during the time of Christ, and a cord around the waist to hold everything together. However, since the sculptor was based in France, he could not make every detail on-site; hence he only sculpted the head and hands of the statue in clay. These pieces, once complete, were shipped to Rio De Janeiro, where they were then made into concrete and then attached to the main body of the statue. The main body of the statue was made on-site following his design from reinforced concrete to that it could withstand the elements.

What is the statue made of?

To build a statue of such epic proportions and with such great significance to the people of Rio De Janeiro, the materials from which to construct it were of great importance. The materials had to be strong enough to withstand the weather conditions on top of the mountain. The materials also had to have great aesthetic value to attract people’s attention to the statue.

However, concrete is not the most beautiful material to look at for this reason, the designers of the statue chose to cover the outside of the statue in soapstone imported into the country from Sweden, which gives the statue a great look. Since the statue is a depiction of Christ, the white soapstone is an illustration of Christ’s purity and goodness. As discussed earlier, the head and hands of the statue were first made of clay from France before being transported to Rio De Janeiro, where molds were made from the clay impressions and finally cast into the concrete, just like the other parts of the statue.

How were the materials of the statue transported?

Construction of the Christ, the Redeemer statue in Rio de Janeiro would have been a monumental task even by today’s standards. Not only was its size a challenge, but also its geographical position made it even more difficult to construct it. During the time of its construction, there was no sophisticated machinery that would have made the work easier, so most of the work was accomplished by brute force.