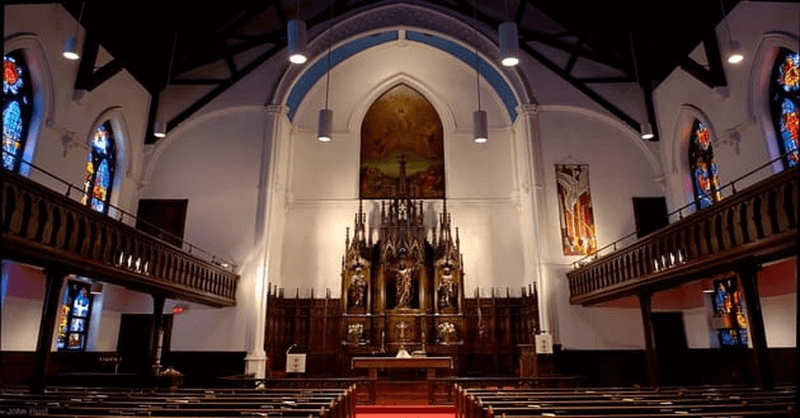 Lutherans do not have the same view about saints as Roman Catholics. So, why are Lutheran churches named after saints?

Some Lutheran churches are named after saints to honor their outstanding contributions to Christianity. In Lutheranism, the term saint applies to any genuine Christian. This does not align with the Catholic ideology on who qualifies and veneration of saints.

How do Lutherans define saints?

In Lutheranism, a saint, as used in the Holy Scriptures, refers to any believer rather than reverends or influential people in the Church. In the New and Old Testaments, different authors use the term saint to describe Christians or God’s people. There is no mention of codification or canonization process for sainthood like in the Catholic Church. Bible verses where the term saint was used;

To the Church of God that is in Corinth, to those sanctified in Christ Jesus, called to be saints, 1 Corinthians 1:2.

To all those in Rome who are loved by God and called to be saints, Romans 1:7.

The greatness of the kingdoms under the whole heaven shall be given to the people of the saints of the Most High Daniel 7:27.

“Sing praises to the Lord, O you his saints, and give thanks to holy name,” Psalm 30:4.

Therefore, an individual does not have to have made a worldwide ministerial impact or have miraculous events attributed to them to qualify for sainthood in Lutheranism. As is visible in the above verses, when used in both the New and Old Testament, the term saint refers to committed and faithful Christians, most of whom would be viewed as average or regular. Also, in Lutheranism, only God, through Jesus Christ, can make people saints, not the Church leadership.

What do Lutheran churches believe about saints?

Lutherans follow Apostle Paul’s ideology about sainthood. They believe that all Baptized Christians who live faithfully in the body of Christ qualify to be called saints. Therefore, miracles are not required to make one a saint.

When you come across a Lutheran Church with a name like Saint Michael’s or Saint Paul, it is hard to believe that the Catholic beliefs about saints do not apply to Lutheranism. Lutheran churches also celebrate the All Saints Day on November 01 every year and an All Saints’ Church service the following Sunday. Martin Luther started the Protestant Reformation on the eve of All Saint’s day; therefore, the term has some significance to the Lutheran Church.

Founders of the Lutheran movement clearly understood sainthood from as early as the 16th century when the Church was founded. The Augsburg Confession, of the most significant texts used in the Lutheran Church outside the Bible, states, “Our people teach that the saints are to be remembered so that we strengthen our faith when we see how they experienced grace and how the faith helped them. Moreover, it is taught that each person, according to their calling, should take the saints’ good works as an example.”

In this regard, there are many individuals that Lutherans remember and regard as saints. An example is Mother Teresa is considered to be a contemporary saint. Based on this definition, miracles do not have to be involved in qualifying as a saint. Therefore, the Lutheran idea of sainthood differs from that of the Catholic Church.

In Lutheranism, all committed Christians, alive or dead, are considered saints. However, the Church still recognizes saints from other churches, including those revered in the Catholic Church. However, as I mentioned, their idea about sainthood differs.

In Catholicism, the term saint is only used to refer to dead individuals sustained by faith, whose good deeds are an excellent example for existing and aspiring Christians, and who had exceptional grace. There are steps to becoming a saint. For instance, a model Catholic is only considered a saint after canonization. In Catholicism, once someone becomes a saint, Catholic adherents are allowed to pray through them because they are viewed as mediators between God and the human race. Lutheranism prohibits this practice because Lutherans believe that no human being qualifies to act as a mediator between God and other Christians. The only person worthy of praying through is Jesus Christ because although he lived and died a natural death, He is the Son of God. However, there is a widespread belief in Lutheranism that saints (all committed Christians) pray for the Church.

Lutheranism teaches that the Holy Scriptures do not instruct people to pray through or to saints. Lutherans believe that their connection to God is past saints. Saints only act as model Christians and are to be emulated for their good deeds and faith in God. However, through the Apology of the Augsburg Confession, Lutherans are allowed to honor saints in only three ways;

Therefore, as I mentioned, in Lutheranism, saints are only viewed as role models but not as mediators between God and Christians.

How do Lutherans, honor saints?

In Lutheranism, saints are honored but not in the same way as in Catholicism. Like other Protestants, Lutherans commemorate the saints to honor their service and devotion to God and to emulate and learn their holy lives.

Saints are crucial in Lutheranism, but they do not revere, pray and interact with them in the ways they believe are meant for God alone. As I mentioned, in Lutheranism, saints are viewed as mediators. Lutherans believe that it is only through Christ that we can pray to God for blessings or forgiveness of sin. Also, praying through or to saints is prohibited in Lutheranism. The death of Christ on the cross redeemed the human race and gave them direct access to God. Therefore, approaching God through other channels disregards Christ’s sacrifice, His sufficient victory, and righteousness.

There are three ways in which saints are honored in Lutheranism;

Do Lutherans pray to saints?

Lutherans do not pray to saints. As I mentioned, praying through or to saints is prohibited in Lutheranism. The death of Christ on the cross redeemed the human race and gave them direct access to God. Lutherans believe approaching God through other channels disregards Christ’s sacrifice, His sufficient victory, and righteousness.