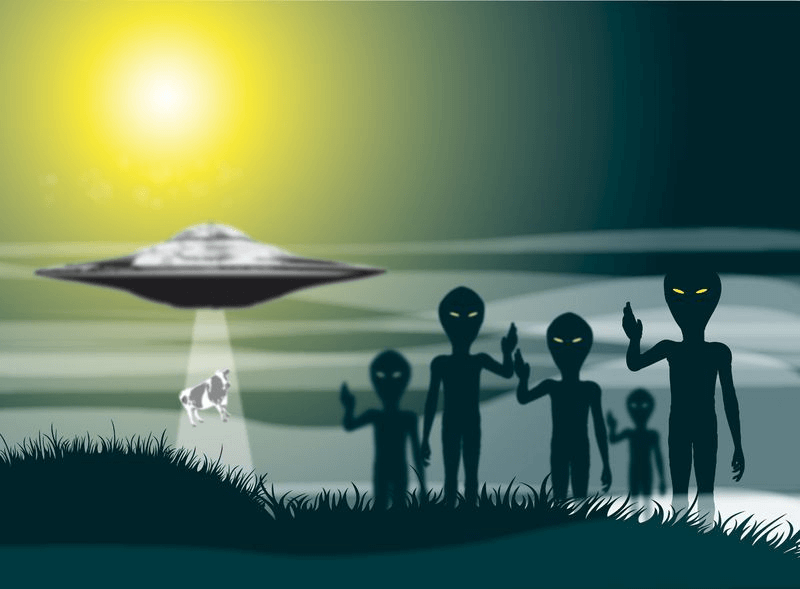 Aliens can be understood as foreign intellectual beings in outer space on other planets such as Mars, on moons, or even in other galaxies. Christians may be stuck in a conundrum when contemplating the existence of aliens and foreign flying objects such as UFOs. Many associate the notion with atheism, naturalism, and other “ungodly” beliefs. Is believing in aliens unbiblical and ungodly? What does the Bible talk about aliens and UFOs?

The Bible does not explicitly mention aliens and UFOs, as there is no direct mention of extraterrestrial beings. Still, others believe that some Scripture can be interpreted to support their existence.

What does the Bible say about aliens and UFOs? Who is Erich Daniken? What does his literature theorize about aliens? Does the Bible support it? If so, where? This article will answer all the above questions while taking an in-depth look at Bible quotes that people use to support and dispute the existence of aliens and UFOs. You’re guaranteed to learn something you did not know before.

What Bible Verses Are Believed to Talk About Aliens and UFOs?

According to which Christians you ask, some believe there may be life on other planets while others don’t. There is a tug-of-war between these two ideologies. Still, Christians are called on to walk in the Light of the Scripture when analyzing different arguments (2 Corinthians 10:5). So, what does the Bible say about extraterrestrial life?

The short answer is that the Bible doesn’t explicitly talk about the existence of aliens or UFOs. However, the word ‘alien’ is mentioned in the Bible but about foreigners of the land. This is in Isaiah 28:21, which says, “The Lord will rise as he did at Mount Perazim, he will rouse himself as in the Valley of Gibeon — to do his work, his strange work, and perform his task, his alien task.” Actual extraterrestrial beings are not referred to in the Holy Book, which leads many Christians to doubt if they are out there.

Further, Christians who don’t believe in aliens argue that the sacrifice Jesus Christ made for humankind squashes the idea of life in outer space. John 3:16 states, “For God so loved the world that he gave his one and only Son, that whoever believes in him shall not perish but have eternal life.” God sent His son to die for our world’s sins and not any other planet’s. God also uniquely designed the planet and made us in His image, according to the Creation story, while the stars were made for other purposes (Genesis 1).

On the other hand, proponents of the existence of aliens interpret and rely on passages such as Job 38:6-7 to support this notion. This Scripture read, “On what were its footings set, or who laid its cornerstone—while the morning stars sang together and all the angels shouted for joy?” They take the phrase ‘morning stars’ to mean aliens. Some also take the apparitions of angels to be aliens. For example, the vision of creatures and wheels that Ezekiel saw in Ezekiel 1:4-28 have been interpreted by some to be alien sightings.

Regarding UFOs (Unidentified Flying Objects), they are nowhere to be found in the Bible. All the objects in the sky have been identified in Scripture as the sun, moon, stars, etc.

Does Erich Daniken Claim That the Bible Talks About Aliens?

Erich von Daniken is a Swiss author who, in 1968, came out with an explosively controversial book titled, ‘Chariots of the Gods?’. In this book, he theorizes that aliens from outer space visited Earth in ancient times (between 40,000 and 500 B.C.) He subsequently wrote other books with similar themes, i.e., ‘Gods from Outer Space,’ ‘Was God an Astronaut?’ and ‘The Gold of the Gods’. Despite these books having outlandish theories and fantasy fiction tales, they were bestsellers worldwide.

In the book ‘Chariots of the Gods?’, Daniken does claim that the Bible discusses aliens. He looks at the stories of Sodom and Gomorrah, Ezekiel’s vision of the angels and the wheels, and the Ark of the Covenant. He also theorizes that the experiences that Biblical characters had with God were encounters with aliens, and the Biblical phenomena that occurred throughout the Holy Book resulted from the advanced technology of extraterrestrial beings.

For example, he wrote that the angels that appeared to people were aliens and the stars were the aliens’ traveling vehicles, otherwise known as UFOs. Erich Daniken takes these stories and happenings as “clues” that the Bible left to prove the existence of aliens and UFOs. His book denotes that instead of these stories being evidence of God’s existence, they prove that there are extraterrestrial beings out there. He implies that the people of those times did not have the scientific know-how to realize it.

Erich also claims that aliens first landed on Earth at its inception and, through experimentation, created man. This parallels the Creation story provided in Genesis 1, but it supports his idea that God is an alien (or aliens) and His continuous appearances throughout the Bible are alien encounters. This is the major book hypothesis in ‘Was God an Astronaut?’

With all that being said, Erich Daniken’s claims have been widely refuted by Christians due to the heretic notions his literature pushes.

Are Erich’s Claims Referenced from The Bible?

Yes, he used some religious references from the Bible to support his claims. In ‘Chariots of the Gods?’, Daniken explores the meanings of famous biblical stories from the Old Testament and uses biblical references such as: