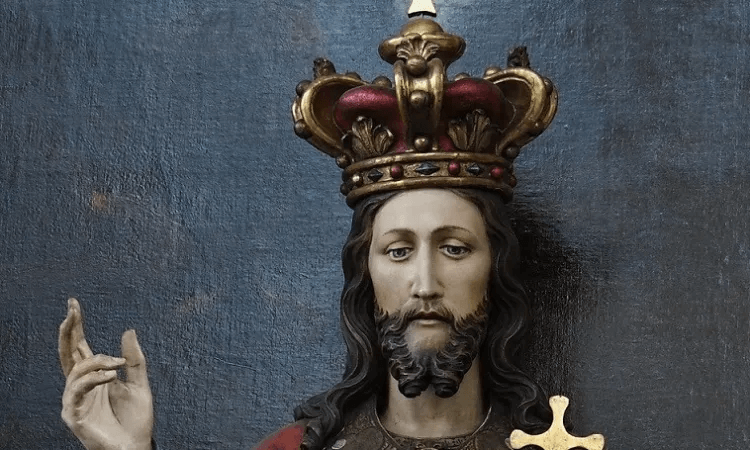 You have certainly heard Jesus being referred to as King. Besides being a king, he had many other titles like a teacher, Rabbi, Son of man, and Son of God; John even called him the word of God. However, does the scripture referring to Jesus as the King means that he came from a royal family? Is Jesus king (the literal meaning of King)?

The Bible says that Jesus is the King of Kings. That means that any other leadership will be conquered and abolished in the end, and Christ will rule over everything. Additionally, before Jesus’ death, the Jewish leaders accused Jesus of making himself King of the Jews and going against Caesar.

So, was Jesus from a royal family? Which King’s family did Jesus come from? Where in the Bible does it say Jesus is King? Why is Jesus described as the King of kings? What does the phrase ‘King of kings’ mean in the Bible? How was Jesus the King of the Jews? Why ‘was the King of Jews’ put on Jesus’ cross? What is the nature of Jesus’ Kingdom? Continue reading to get more information and answers to these questions and more.

Was Jesus from a royal family?

Jesus’ immediate family was not royal. His Father was Joseph, a carpenter, and his mother was Mary. However, the scripture in the book of Mathew chapter, when it gives the family tree of Jesus, notes that Joseph belonged to the lineage of King David.

Furthermore, when the angel appeared to Mary to announce that she would conceive and give birth to Jesus, the angel noted that God would give Jesus the throne of his Father David. Luke 1:32-33 says, “He will be great and will be called the Son of the Most High. And the Lord God will give to him the throne of his Father David, and he will reign over the house of Jacob forever, and of his Kingdom, there will be no end.”

Which King’s family did Jesus come from?

Jesus came from David’s family, as the Bible paints his Father Joseph as a descendant of David. The Bible says that when Caesar ordered everyone to go and register from their hometowns, Joseph, who was Jesus’ Father, went to Bethlehem because he belonged to the house and line of David. The gospel of Luke 2:3-7 accounts for Jesus’ birth in Bethlehem house of David. Additionally, the family tree of Jesus, as given in the book Mathew 1:17, affirms that Joseph, the Father of Jesus, was of the line of Jewish Kings through King David and King Solomon.

Where in the Bible does it say Jesus is King?

Several verses in the Bible refer to Jesus as King. John, in the book of Revelation 19:16, calls Jesus the King of Kings“. On his robe and on his thigh, he has his name written; King of kings and Lord of Lords.” In Revelation 19, John had a vision where he went to heaven and saw Jesus. He describes his appearance by calling Jesus King of Kings; the words he notes had been written on the robe that Jesus had worn.

1st Timothy 6:14-15 says, “To keep the commandment unstained and free from reproach until the appearing of our Lord Jesus Christ, which he will display at the proper time, he who is the blessed and only Sovereign, the King of kings and the Lord of lords.”

Additionally, John also refers to Jesus as King in the book of Revelation 17:14, “They will make war on the lamb, and the lamb will conquer them, for he is the Lord of Lords and King of Kings, and those with him are called and chosen and faithful.”

Why is Jesus described as the King of kings?

Bible scholars conclude that Jesus was described as the King of Kings because, in the end, he will be the only ruler, as all others will be abolished or conquered. Only Jesus Christ will reign as the Lord and supreme King. There will be no other power, no other King, no other Lord that will rise and oppose Him and win. Isaiah 40:23-24 is a myriad reference to the absolute reign of Jesus that is to come and notes that the Lord will bring “Princes to nothing.”

The book of Hebrews 1:3 describes the sovereignty of Jesus as the King of Kings and notes that he “upholds the universe by the word of his power.” Though Christ humbled himself and served his purpose on earth, his resurrection marked the beginning of his glory, as the Bible notes that even his body was glorified. He will come back to judge sinners and exercise absolute power over the earth and anything in it, hence why he is the King of Kings.

What does the phrase ‘King of kings’ mean in the Bible?

Theologians from Got Questions Ministries note that the phrase ‘King of kings’ indicates someone who possesses the power to exercise absolute dominion over his Kingdom. Basically, the idea of the phrase ‘King of Kings’ means that there is no higher authority past that. The reign of Jesus Christ will be inviolable and absolute. That is why all through the Bible, other leaders are referred to as ‘kings’ or ‘lords,’ but Jesus is referred to as ‘King’ or ‘Lord.’

How was Jesus the King of the Jews?

Though the Bible does not explain how Jesus became the King of Jews, some passages hint at how and why he acquired the title. First, when the angel of the Lord appeared to Mary in the book of Luke 1:32-33, he told Mary that he would conceive Jesus, whom God would give the throne of King David.

Back in the Old Testament, in the book of 1st Samuel 16, after God rejected Saul and anointed David, he promised that an anointed King would come out of David’s line and would redeem Israel. For several generations, the Jews waited for the arrival of the Messiah, who will now be their King. The scripture confirms that the coming Messiah referred to in the Old Testament is Jesus, born in David’s lineage.

Just after his birth, the wise men went looking for Jesus, for they had heard that the King of the Jews had been born. Mathew 2:2 notes that when King Herod heard this, he called the Wise men to ask them about Jesus’ whereabouts.

Why ‘was the King of Jews’ put on Jesus’ cross?

It is not clear why Pontius Pilate prepared a note that was fasted on the cross of Jesus and read, “JESUS OF NAZARETH, THE KING OF THE JEWS (John 19:19).” When Jesus was arrested, Jewish leaders used the charge of sedition as a means to execute him. They claimed that Jesus called himself the King and therefore was comparing himself with Caesar.

John 19:12 says, “From the on, Pilate tried to set Jesus free, but the Jewish leaders kept shouting, if you let this man go, you are no friend of Caesar. Anyone who claims to be King opposes Caesar.”

Theologians can’t say why Pilate was trying to set Jesus free and even why he went ahead and prepared the notice that described Jesus as the King of Jews. In John 19:21-22, John notes that Jewish leaders tried to protest to Pilate not to label Jesus as King of Jews, but Pilate answered, “What I have written, I have written. He kept to himself whatever reasons he had for doing so.

What is the nature of Jesus’ Kingdom?

Bible scholar Don Stewart notes that Jesus described the nature of his Kingdom to Pontius Pilate during his arrest period. Jesus told the Roman leader in the book of John 18:36-37 that his Kingdom is not of this world. Jesus noted that if his Kingdom was of this world, his servants would fight.

Additionally, Jesus described the nature of his Kingdom in the book of John 3:1-8 to Nicodemus, who had gone to see him at night. Jesus noted that no one could enter his Kingdom (which he referred to as the Kingdom of God) unless they were born again, both of water and the Spirit. Therefore, the Kingdom of Jesus does not exist on earth but in heaven.

10 Bible Verses That Teach Us Jesus Is King

What does it mean that Jesus is King of kings and Lord of lords?

Why Is Jesus Called King of the Jews?

Was Jesus a King?