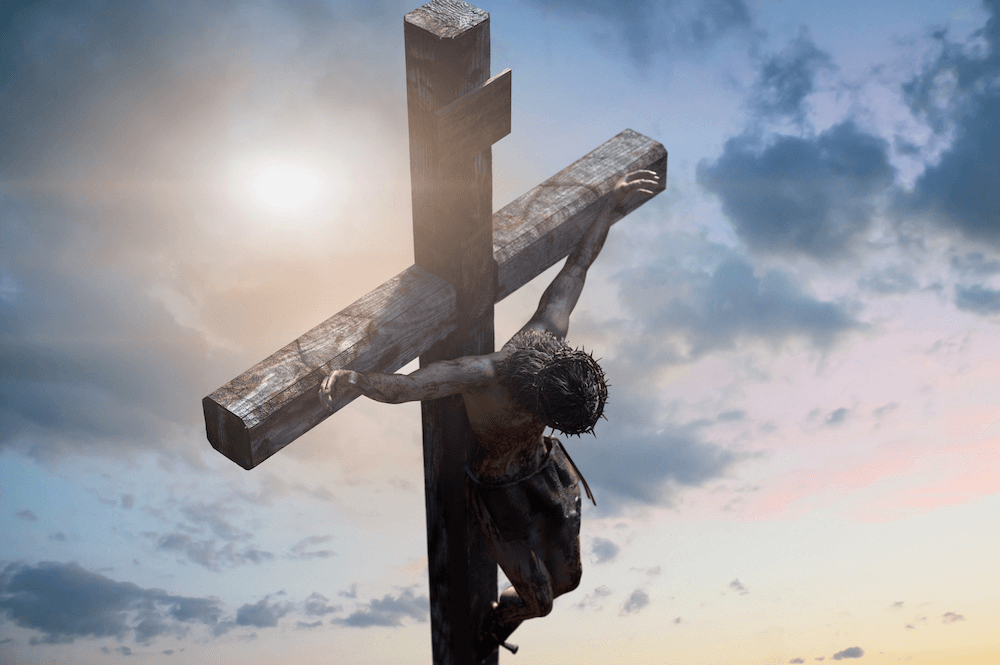 Jesus on the cross is one of the most familiar images that Christians have. However, the details of His crucifixion might be unclear, especially for those unfamiliar with Roman traditions. This might lead some to wonder, “How was Jesus crucified?”

The details of how Jesus was crucified are unclear since they are not distinctly mentioned in the Bible. However, since the Romans crucified Jesus, it is speculated that they crucified him according to Roman traditions. When crucifying someone, the Romans would give the victim the crossbeam to carry for himself and nail the man’s wrists and feet to the cross.

So, how did the Romans crucify? Where did they drive the nails through the victim? How many nails did Jesus have on the cross? How was Jesus nailed to the cross? How does the Bible describe the crucifixion of Jesus? Keep reading to learn the answers to these questions.

How did the Romans crucify?

It is important to understand how the Romans crucified people to have a clearer picture of how they crucified Jesus. Looking into the history of Roman crucifixion, crucifixion was a form of punishment that involved suspending victims from a large cross typically made of wood. Most of the time, these victims would be pirates, enslaved people, or political agitators.

Before the victim was crucified, he was first whipped and was made to carry or drag the crossbar to the place where he was to be crucified. The Bible indicates that Jesus carried his cross, as seen in John 19:17. Still, according to Roman customs and literary sources, criminals only carried the crossbeam since the upright shaft was already firmly fixed on the ground. This could make some Christian scholars speculate that Jesus carried the crossbeam only, not the entire cross.

It was also mandatory for the criminal’s name and crime committed to be written over his head. He would also be stripped of his clothing as he was being whipped or once he arrived at the location of the crucifixion.

Were nails driven through wrists or hands during the crucifixion?

The nails were driven through the wrists of the criminal, not the hands. According to Britannica, the methods that the Romans used during crucifixion varied. One of the methods would be to drive a nail through the man’s wrists. This was to ensure the man was completely bound to the cross.

One would also assume that this was to inflict pain on the criminal since the whole idea behind crucifixion was to punish people for their crimes.

How many nails did Jesus have on the cross?

However, we can speculate the number of nails Jesus had on the cross from the scriptures. It is known that Jesus had five wounds, on his hands, on his feet, and on his side. According to Roman crucifixion, nails would be driven through one’s wrists and feet.

Unlike the wrists, the feet would be nailed together, one foot on top of the other. The nail would then be driven through the arch of each foot. With the two nails on the wrists and one on the feet, scholars presume that Jesus had three nails on the cross.

This is also backed up by most crucifixion arts. We see Jesus on the cross with His arms outstretched, and his two wrists nailed to the cross. We can also see his feet nailed on the cross, one foot on top of the other.

How was Jesus nailed to the cross?

After they arrived at Golgotha, Jesus was nailed on the cross with two nails driven into each wrist and one nail driven into His feet. This was according to Roman tradition.

As mentioned, before one was crucified, he was scourged and told to carry his cross to the point of crucifixion. Jesus also went through this before he was nailed to the cross. The people went the extra mile and put a crown of thorns on his head, as seen in Mark 14:17. This was to mock Jesus.

How does the Bible describe the crucifixion of Jesus?

The crucifixion begins in Luke 23:13-25, where Pilate released Barabbas instead of Jesus after the crowd demanded that he be released. The crowd also demanded that Jesus be crucified. With hesitation, the Pilate agreed.

After Pilate’s judgment, Jesus was scourged and made to carry his cross to where he was to be crucified. The Bible depicts Jesus’ crucifixion as a sad ordeal to some. This is seen in Luke 23:27, where a group of women wept for Jesus as he carried the cross. In Luke 27:28, Jesus turns to them and tells them, “Daughters of Jerusalem, weep not for me, but weep for yourselves and your children.”

According to Matthew 27:33, Jesus was crucified in a place called Golgotha. Golgotha was also known as “A place of skull .”The executioners then crucified him with two other thieves, one on his right hand and the other on his left, as is seen in Mark 15:27. Once they crucified him, they divided Jesus’ garments amongst themselves.

There was a heavenly reason why Jesus was crucified. His crucifixion was necessary to take away the sins of the world. God planned to save sinners, and Jesus, being the Lamb of God, had to die for this to happen. This is seen in John 1:29.

How many nails did the Romans use?

How many nails did Jesus have on the cross?

Examples of Jesus’ crucifixion in art

Why was Jesus crucified?